The Cabbage Chronicles Part 5 — Ah…Ok. (What I Understood About My Case)

Hi again. And here’s the 5th installment. Thank you for still following this story (though the blogger is really so “kupad” in writing, sorry.) In this blog, I will share my understanding of my particular case, starting with a little review of my health background and history, the diagnosis of my heart condition, the CABG procedure I went through, the explanations that I received from my doctors and nurses, and some information that I learned from my own studies and research on my ailment and surgical procedure. 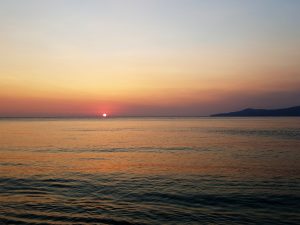 Another breathtaking performance of the Anvaya daily sunset show.

Before I go on with the stories, just another update. Last Feb 21 to 23, 2018, I got my first taste of out-of-town travel about a month after my CABG. This “cabbage” patient went to her favorite place to visit without flying — Anvaya Cove. I spent 3 days and 2 nights there with BFF Nona, my nurse, and a guest balikbayan couple from New Zealand. Ahem, I had clearance to travel to Morong, Bataan from my cardio (wag kayong ano!). Because I’m not allowed to swim yet (super inggit, super tempting pa naman), I got to try hiking on Anvaya Cove’s nature trail for the first time. It was fun. I didn’t realize there will be such an uphill climb, but I managed, with the aid of a trekking pole. There’s actually a longer trail called “the fitness trail”, which had various exercise spots at around 10 stops along the way. But nah, we didn’t want that — we just wanted the easier one. Besides, I didn’t want to “push it” too much. No big hospitals for emergency cases near Morong.

Here are some pictures from Anvaya… 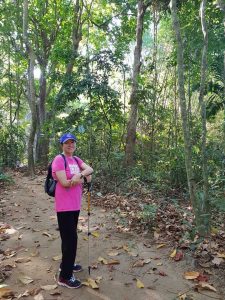 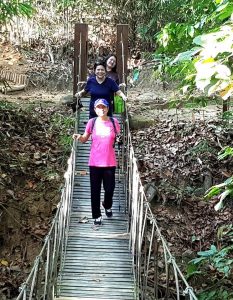 This hanging bridge can accommodate only 5 pax at a time. What size kaya? 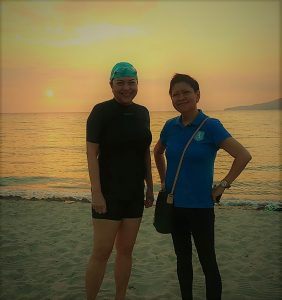 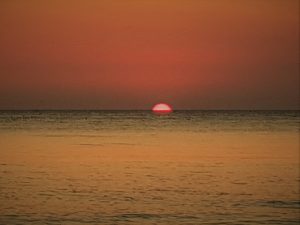 The camera can never do justice to a beautiful sunset. Zoomed in, but blah. Anvaya does this daily.

Now, back to the “cabbage” history. Most of you probably have knowledge already (from my previous blogs and from chats with me) of how I came to learn of my heart condition, plus a little bit of my state of health at around the time of my diagnosis. But just to recap, here’s that background again.

I had no idea that I had a heart ailment because I wasn’t feeling anything. No angina whatsoever (no pain in the chest), no shortness of breath or feeling weak. It was only through my Executive Check Up, the treadmill stress test, in particular, where indications of heart trouble surfaced.

From the treadmill stress test results, I consulted a cardiologist, who advised me to undergo a Treadmill Stress Echo Test ( a combination of treadmill stress and 2D echo test). The results of the TSET necessitated an angiogram. I went to the Philippine Heart Center for the angiogram and based on the results, I had coronary artery disease (CAD), three vessels involved. A coronary artery bypass graft (triple bypass) procedure was recommended as the better option rather than angioplasty (stenting).

My cardiac surgeon said that when they say “triple” bypass, it doesn’t mean you have three blockages. “Triple” means that there are blockages on three major vessel systems around the heart. In my case, I had blockages on 3 major arteries:

It also turned out I needed 6 vessel grafts on the 3 systems, hence, the 6 gashes on my left leg for the great saphenous vein graft extractions. In case you’re wondering, yes, I’ve also learned from this experience that our leg can function fully even without the great saphenous vein (same with the LIMA – left internal mammary artery). Isn’t it amazing that God created us with spare stuff like that so skilled doctors can use them for fixes that He allowed them to learn and master? (Kung isipin mo, di ba, ganun ang design ni Lord sa atin — amazing, di ba?)

Literature says that a typical triple bypass CABG procedure usually takes from 3 to 6 hours. Typical, usually, but mine took a bit longer — 8 hours (iba ata ko, te!). The surgical process, as described and reported to me consists of the following general steps (the way I understood it):

The post-surgery report said “patient tolerated procedure well” (Naks!). At this point, may I just express my extreme admiration for surgeons, after understanding those steps that they needed to do to fix me up. I can’t imagine how much courage a surgeon has to have especially in performing procedures like a CABG (and anything that involves a major organ or is a major life-saving procedure). No matter how many operations a surgeon has done, each case will always be unique and I think there are so many things that can go wrong before, during and after a surgery. I had absolute trust in my surgical team and I gave my full consent to my chief thoracic surgeon to make whatever decision he needs to make in case something unexpected happens in the course of my surgery (before, during and after). It was saying, “Doc, I trust you. If anything happens, it’s your call.” Of course, in reality, they will try to obtain consent from my family representatives if they can. My surgical team consisted of my chief surgeon, 3 other surgeons, a lead anesthesiologist, 3 other anesthesiologists, a scrub nurse, and a circulating nurse.

So you know from the previous blogs that I went to the SICU (surgical intensive care unit) after the 8-hour procedure. And that’s where unexpected complications happened. I had massive internal bleeding. At around 8pm on January 18, I was sent back to the Operating Room for an emergency procedure.

On the CABG consent forms, several possible complications were indicated. I could suffer a heart attack during surgery, I could have a stroke, my heart may fail to restart coming off-pump, blood clots may travel through the bloodstream. And one of the common complications is bleeding at the surgical sites. There are many things that can trigger or cause bleeding — a single rogue heart beat, high blood pressure, an abnormal rhythm, etc., can pop one of the sutures open.

Based on the medical report and my post-reoperation chat with my surgeon, this was what happened.

My CABG was completed at around 3:35pm. My surgical team had another case scheduled at 4:30pm, which went about smoothly. I was under observation at the SICU then. After they finished that second case, my doctors went back to monitoring and observing me, administering medication, and giving me more blood to replace what I was losing. I continued to lose blood and my blood pressure was swinging — dropping, leveling, spiking. Before 8pm, my medical team made the decision to send me back to the OR for emergency re-operation to fix the bleeding.

Around 8:20pm, my second surgical procedure began for essentially the same team to perform mediastinal exploration and fix the cause of my internal bleeding. Practically the same procedure as my CABG was done, i.e., they reopened my chest incision, removed (and counted, whew!) my sternal wires and spent around 3 hours observing my heart and chest cavity, and evacuating clotted blood. It took a long time for them to find the source of the bleeding due to the “difficult exposure” — it was coming from the back side of my heart. Hence, they had to reconnect me to the CPB (heart-lung) machine so they could tilt my heart up and examine the back side. There, they found the bleeding among the fine veins branching out of a vessel on the LCx vein graft. Doc said it took them hours to trace the bleeding but fixing it via stitching actually took only a minute. They left me open for some time for further observation, and when they were satisfied that the bleeding has stopped, proceeded to close me up as before. My second open heart procedure took another 5 hours. It was completed at 1:10 am, Jan 19.

No matter what happened, no matter how I think about it, no matter what other people think about it or opined about it, I am absolutely happy with the outcome of my “cabbage” procedure at the Philippine Heart Center (PHC). Before deciding to undergo CABG, I considered other options, consulted several doctors, listened to advice from family and friends — angioplasty, pure medication, plant-based diets, oriental/ herbal cures, and non-traditional methods. CABG was my choice. I knew it meant a lot of pain, but it was the option that offered me the most peace of mind.

I also considered other hospitals and surgeons — Makati Med and St Luke’s. The PHC was my choice. First of all, the other hospitals were not accredited for the Philhealth Z Benefit. The PHC specializes on heart ailments and procedures, and the rates and fees are just around half or a third of those of the other two. Though the PHC is far from where I live, it wasn’t very inconvenient. I’m happy with the service I experienced at PHC, despite its being a government hospital. Also, because of the very long queue for rooms and hospital services, I felt the PHC and its staff are quite eager to send you back home at the soonest possible time. In my case, it somehow set my mind up for quick recovery. I spent 3 days at the SICU. The second day after returning to a private room, on Jan 22, they got me sitting up, getting off the hospital bed, standing up and doing basic exercises, including walking. On Jan 24, 2018, 8 days from admission, I got discharged from the hospital.